In my classes you often hear me talk about the hips and the importance of opening up the hip region to relieve tension. (You also often hear me mocking myself in some hip opener positions or referring to another “model” in the class to look at since my hips are tight.  But I’m working on it.)

I am going to address why our hips get so tight and why it is important to do exercises to open up the hip region.

When I talk about opening up the “hips” I am mostly addressing the hip flexor region. That is the front (anterior) part of the hip. The Iliacus and psoas major and minor form a muscle group called the iliopsoas or hip flexors (see illustration below) 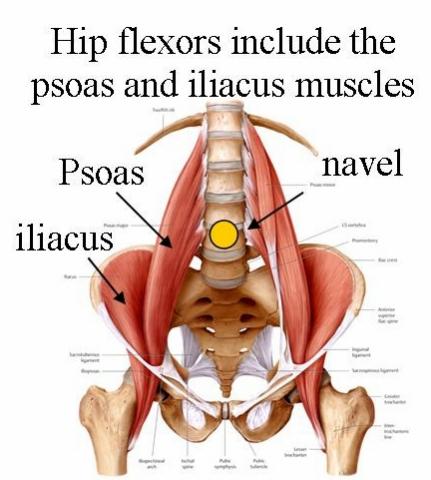 One reason the flexors are tight is because of the large amount of time that they are in flexion – sitting in the car, at a desk or watching TV.  Also, during that 7-8 hours of sleep, the hips are typically “closed”. Finally, when the adjoining muscle groups (Glutes or hamstrings) are tight, they can also cause the hip flexor region to be tight.

But, it is important to note hips can be strained also because of our emotional state. There are countless research studies that show a link between tension in the hips and emotions. When we feel sadness or stress this triggers a protective response in the hips. Typically we clench the jaw or fists in anger or fear.  There is the same response when we feel sadness, anxiety or stress. We tend to “curl up”, draw our knees in and come back to a fetal position. We are holding in those emotions in an effort to protect ourselves and yes – that tension stays in the hips!

It is so important to open up the hips to relieve the physical strain and not cause injuries (often times lower back pain and hamstring strains are caused by tightness in the hip region). It is also critical to relieve this tightness to relieve the stress or anxiety we fell. Again, there is such a mind – body connection with the hips!

Warm up the hip region before each workout. Examples are standing leg swings, deep lateral lunges, plank spiderman, fire hydrants and hip circles in the table-top position. This is just a small sample of exercises!

Be the first to know about new programs and exclusive offers.